God’s Nectar by Beetle Juice Vapors is a tasty e-juice that has the flavor of peach rings and gummy candy. It is a quite similar to another e-liquid from the same company called Southern Orchard. The difference between the two e-liquids is that the latter has a more authentic peach flavor. Also, God’s Nectar has a stronger gummy bear flavor. It tastes like a 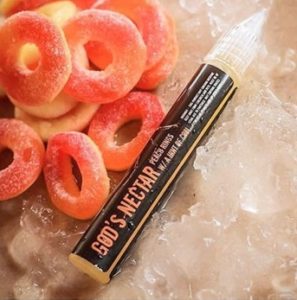 sweet peach candy with mellow sour notes. There is a splash of cooling menthol flavor in this e-liquid. This is certainly an all day vape.

You can buy God’s Nectar and other Beetle Juice Vapors e-liquids from just about any vape store. A 35ml bottle of this e-juice is going for just $9.95 on the VapeFu online store. This shop only stocks e-liquids that have received at least 50 positive reviews. VapeFu does not only sell e-liquids but also tanks, mods, coils, and other vaping accessories.

God’s Nectar by Beetle Juice Vapors was made for vapers who love peach candy and chewy gummy candy. You will taste the sugary sweetness and fruity flavor of gummy peach candy on the inhale. On the exhale, you will get a mild tart flavor and a blast of cooling menthol. The peach flavor in this e-juice does not taste like a real peach fruit. Instead, it comes off as artificial. This is the kind of peach flavor that you expect to get from a candy. The menthol flavor in God’s Nectar is not very strong.

If you buy a bottle of Beetle Juice Vapor’s God’s Nectar and the taste does not live up to your expectations, give it one or two weeks to steep. Steeping is necessary because the ingredients used to make e-liquids do not have the same density. During steeping, the flavorings and all the ingredients blend properly so that the true taste will come out. Steeping works best for e-liquids that contain nicotine because it contributes to the oxidation of the flavorings. This e-juice will get a dark amber color when it has had enough time to steep.

God’s Nectar by Beetle Juice Vapors is a MAX VG e-liquid. It has a vegetable glycerin (VG) and propylene glycol (PG) ratio of 70/30. You can choose to vape it using either a sub ohm tank or a rebuildable dripping atomizer (RDA). It will not mess up your coils quickly. The vapor production of God’s Nectar is mind-blowing. You will get huge billows of dense vapor from each puff especially when you are vaping with a powerful device.

God’s Nectar by Beetle Juice Vapors is made with different nicotine concentration levels. You can get this e-juice with zero nicotine for those who are trying to kick off the habit. It is 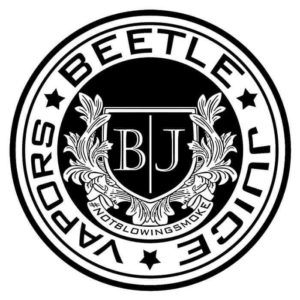 God’s Nectar has the same classic packaging design that is used for all the e-liquids from Beetle Juice Vapors. It is packed in a gorilla unicorn bottle which has a black label on it that features an image of a horned beetle as well as some information about the e-liquid like its nicotine level, bottle size, and more. You can fill a tank or pour the e-juice on your coils directly from the bottle without spilling it.

Beetle Juice Vapors is an award-winning e-liquid maker based in California. This company, which is founded in 2013, makes some of the best cheap vape juice blends that you can find on the market. Beetle Juice Vapors e-liquids are handcrafted in the US with top quality ingredients and tested before they hit the shelves. Currently, there are eight e-liquids in the Beetle Juice Vapors line namely Blueberry Hills, RIO, Riddler, Southern Orchard, God’s Nectar, Bedrock, Miley, and Now and Later.