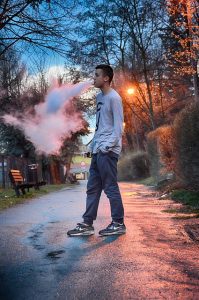 The electronic cigarette has experienced an immense boost in popularity over the past decade. This device, which was invented in 2003 in China, has become a must-have thing for urban youth today. With the popularity of e-cigs have come questions about its safety and long-term effects. Many have asked whether the rise of electronic cigarettes could lead teens and other people to start smoking.

Some controversial studies claim that vaping can ultimately lead more teens to start smoking. This is a faulty standpoint for many reasons. First, vaping was created as a healthy alternative to smoking. According to the U.S. Centers for Disease Control and Prevention, millions of American teenagers put their health at risk by smoking tobacco cigarettes. However, between 2011 and 2015, when there was a sharp rise in the number of teenagers using electronic cigs, there was also a decrease in the number of teens using traditional tobacco cigarettes.

Critics of e-cigarettes fail to acknowledge that traditional cigarettes are also popular and teens could be drawn to them regardless of the influence of vapes. It is very difficult to tell if an individual was led to try cigarettes after seeing someone vaping; just as it is hard to determine the chances that a person would become a smoker if that individual had never seen someone smoking a cigarette.

To be clear, excessive exposure to nicotine can be harmful to the brains of developing teens and younger children. Therefore, many countries have created laws against the sale of vaping products to persons under 18 years old. Also, vape manufacturers do their part to warn against the use of their products by pregnant women and people under the age of 18.

Critics of e-cigarettes who say that the growth of vaping among teens could make smoking seem normal fail to realize that vaping and smoking are two very different things. There is no combustion in e-cigs. Instead, the e-juice is vaporized by a heated coil. Also, unlike traditional tobacco cigarettes, you can choose just how much nicotine you are puffing from your vaping kit. There are many e-juice brands with different levels of nicotine and numerous flavors to choose from. There are also e-juices with absolutely no nicotine present in them. With the lively online community of vapers, it is very easy to find which is the best e-cigarettes and the best e-liquids for you. The bottom line here is that vaping and smoking are fundamentally different; like night and day. Rather than harmful smoke, you puff on flavored aerosol while vaping.

Studies have shown that e-cigarettes can play a positive role in helping people quit smoking. A study carried out in England revealed that a person’s chances of successfully stop smoking tobacco cigarettes are almost tripled with the aid of e-cigs. The reason is very simple if you consider it; instead of fighting the craving to smoke, you can just replace what you are puffing on. This may be one of the reasons why vaping has proven to be more effective in helping people kick their smoking habit that other quitting aids like nicotine gums.

There is a consensus among researchers that more long-term studies into electronic cigarettes and vaping is needed. However, it is important that vaping is not vilified before we get to understand it properly.

There is no doubt that vaping is becoming more widespread and this could lead to an increased appeal among the general public – even teens. Instead of attacking e-cigarettes, it is better to educate teens about vaping. Making teens aware of the potential dangers of using a vape at a young age could do more to dissuade them from using an e-cig than trying to scare them from it.

The Pax Killer Alfa vs. Pax

Do You Want More Vapor From Your ...